Jules Bastien-Lepage (1848-1884), a French Naturalist painter, drawn to art at a young age, his family lived in a village and grew grapes in a vineyard. Jules went to Paris in 1867 to study art at École des Beaux-arts. At the school he spent more time working alone and drawing than attending classes. Jules fought in the Franco-Prussian war (1870-71) as a young man. After the war he returned home and painted the villagers. His first notable success came with his painting Song of Spring in 1874.

Of his many masterful works, I’d like to focus on his painting Joan of Arc, or Joan of Arc Listening to the Voices, painted in 1879. A few points worth mentioning here is that both Jules and Joan grew up in the same village of Lorraine. The house and garden in the painting is modeled after Jules’ family’s house and garden.

In the Franco-Prussian war, France lost Alsace and Lorraine to Germany. Joan of Arc, the knight of faith from Lorraine, acquired new significance and meaning for the injured nation – the martyr became a figure that could help raise morale. In Bastien-Lepage’s painting we witness Joan in the garden as she is visited by Archangel Michael and the Saints – it is the moment of inspiration that sends Joan on her divine path.

There are a few very interesting compositional choices in this painting I’d like to move through – I’ve been looking at this painting for a few consecutive days, and I’ve continued to notice some new things. To begin with, there is the unusual, and beautiful figure of Joan. She looks overcome, flushed, her head titled and eyes wide, as though she is possessed, suddenly becoming aware to a divine presence and a higher state of being. The way Jules has rendered her is masterful.

Of the posturing, what is perhaps most notable is the raised arm. In Joan’s raised hand she seems to be loosely taking hold of some foliage. The hand seems to yearn toward, and carry the eye to the golden path, that leads out of the painting. There is a suggestion through color and composition, this is the divine path that Joan will walk once inspired, it is a golden path that leads out of the garden, away from the home. She opens her hand to the path as though she is being led there by the Saints. She also shows the path to the viewer – we as viewers of this instant bare witness to the moment of divine inspiration and vision of future. With the way the distant foliage is entering the hand of Joan, there is a sense that the future is merging with the present, or, what is far away is also close.

Still focusing on the arm, I noticed there was a curious compositional decision to place either chopped wood, or light roots of the tree beneath her raised arm. Here the image reaches beyond representation, uses visual ambiguity to show us more – the chopped wood or light roots seem to make a wing of Joan’s arm. The wood begins to function as feathers of the wing, and there is again a strange synthesis between the raised arm and what would be the background of the painting. The painting becomes more abstract, no longer abiding by rules of physical space perception – or rather, it simultaneously demonstrates representative understanding of physical space, and also a more abstract perception of the space of painting as a space removed from reality. This ambiguity, or synthesis, is carried out with such grace that it never becomes confusing, it allows the viewer to make choices on what to see and what to accept – the depiction functions both as a representative painting, and also in a space for the imagination.

There is a sense, with this painting, that Joan is being engulfed – the garden is bending the rules of physical reality – the light source is unclear or irrational as is faith – she has become immersed in this fertile faith – green, gold, alive, intense.

The depiction of the Saints takes place behind Joan, they are only there for the viewer – Joan has already internalized them, she listens, looks up and away, further. The garden that she stands in is a sort of externalization of Joan’s interior, displayed through art for the viewer only. There is an understanding of the moment, Jules must have thoroughly felt the moment of inspiration and faith – a painting is understanding the instant of the depiction. The saints are transparent and hovering, actively creating a new sense of interaction between higher and lower states of being – changing the laws of physical reality, elevating what is common to a state that is extraordinary. The art allows what is intangible to become manifest, unexplainable phenomena of inspiration takes the form of spirits and saints. To have faith is to continue to believe in unexplainable moments, to let those moments guide you through doubt, adversity, and contention. Faith can be sustained only by passion – to live passionately is to live guided by moments of inspiration and intensity, moments of unexplainable visitations and sudden shocks of vitality, moments when an awareness of a higher state of being seems unquestionable – when the tide of the eternal ocean raises the river that runs within. 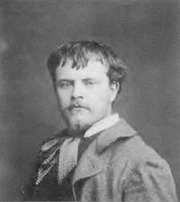