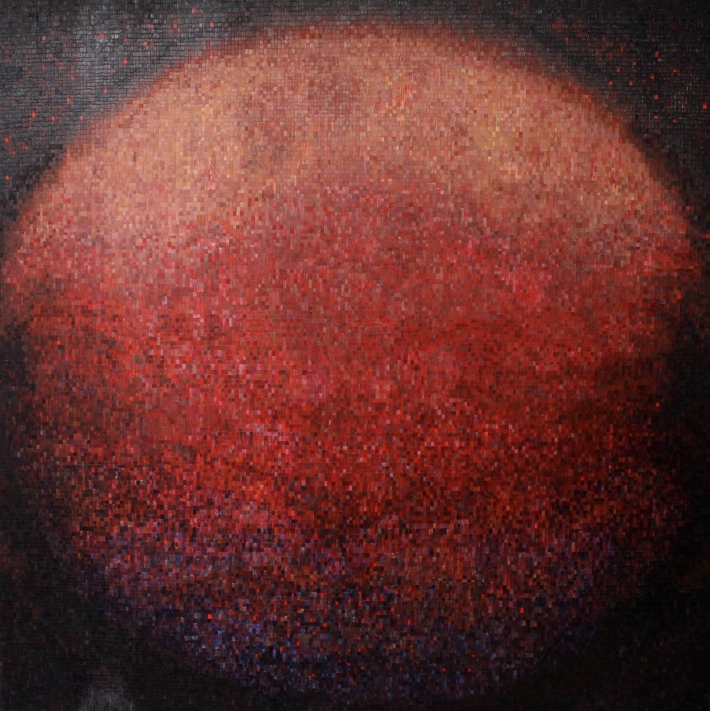 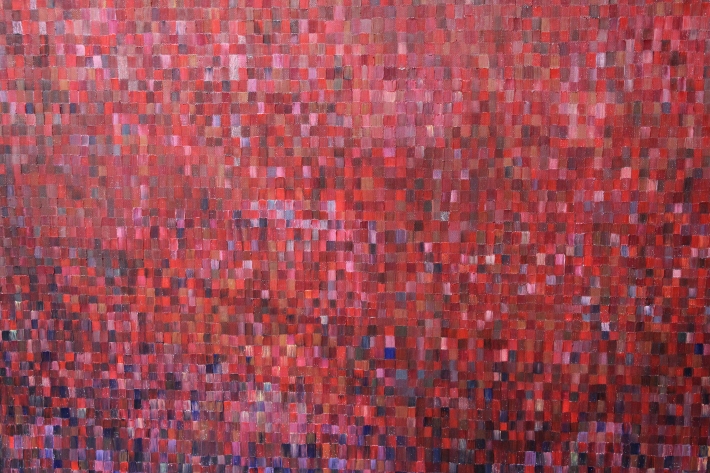 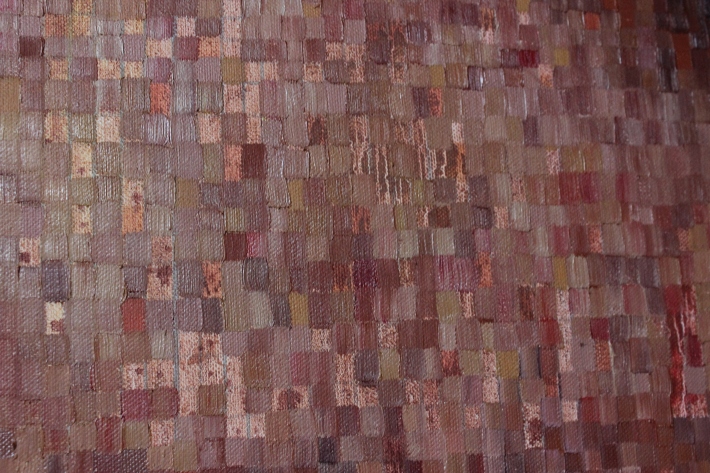 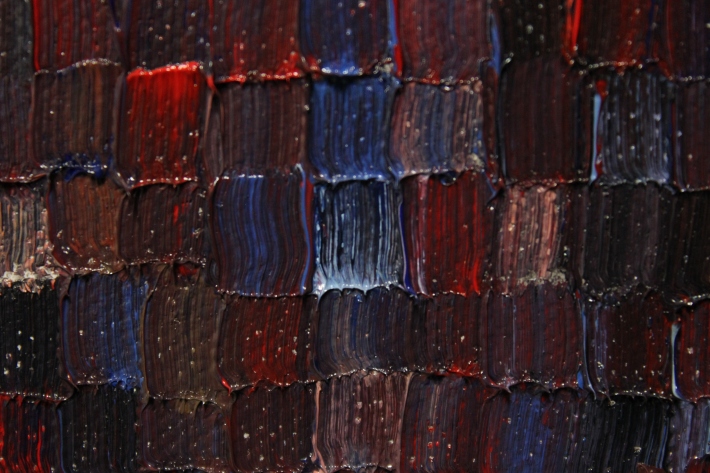 This painting takes place inside the womb, it is the view from within the protective hollow. The light is strongest on what would be the top of the pregnant belly, where the view from the inner world becomes orange. The original intention with this piece was to make a companion to Deep Sea, which is the same size and same basic sized grid. The way this painting came to completion is not something I could have predicted at the outset, what was discovered in the process gathered inertia all on its own that led to formulation and the discovery of new techniques.  I painted this painting every day for 5 weeks; I am currently painting more intensely than I have ever painted in my life. Painting requires a strange energy that must be trained, comparable to the way an athlete trains for endurance; the energy source is a well that can become deeper.

A few notes on this piece:

–       With this painting I was interested in the origin of formation – I wanted to take the grid and bring it to the beginnings of the human.

–       Both In Utero and Deep Sea are an immersion, or subjectivity engulfed, both are the view from the imagined subject.

–       With In Utero I have begun having ideas about the medium itself, rather than having an idea that I think will work well as a painting. What I mean by this, is that this painting came from understanding how the paint will react with turpentine in order to create an effect that serves the concept of this piece, or how a brush stroke of lighter hued paint on top of dark paint will look and create a fleshy, bodily sort of effect that becomes useful to the work. Notice on some of the detail pics there are what appear to be veiny streaks in the grid, this is from an excess of turpentine that runs and splits the paint when it dries. This became useful in the areas of the womb that I imagined the most light would be coming through, making the body more transparent, comparable to the sun through a closed eyelid. In these areas the grid breaks a bit, and a new vision is allowed, a more veiny, free, less controlled sort of look where a certain technique becomes useful. I have become very interested in what paint itself is capable of expressing.

–       The first grid I ever painted, Pale Composition, began with a thought of completing a work that touched a limit of what a painting is capable of expressing, outside of representation. In other words, I was interested in the ways that a painting can function without representation, and still communicate intangible concepts like patience or faith. Pale Composition was almost entirely about the how and almost completely devoid of the what. With In Utero, I feel as though I have made a step in so far as this painting is equally about the what and the how. Perhaps with this painting the what became the how, whereas with Pale Composition, the how was also the what.

–       I painted this from the top down, by the end I was curled into a nearly fetal position, when I was about midway down, the technique began to change, as the light became lost and the grid was no longer breaking I began using more paint, and overlapping 2 or 3 brush strokes on top of each other in order to get the effect of multiple color streaks per square. This demanded that I paint fast, and intensely. By the time I got ¾ down the circle leaning in to start painting was like holding on to a pole that continues to grow and get wobbly. The paint on the brush starts mounting up, the body starts hurting from the posture I am maintaining, I’ve been holding my breath for two minutes, etc – I would endure the pain and sustain the painting saying, “push through, push through, push through”. The important point here though is that this is a painting composed of spurts of intensity – attack, release, attack, release. With this sort of painting, the color application became guided almost entirely by instincts. It was nearly impossible to reflect on the decision-making when I was engaged. It became important to mix the right colors, and breathe and decide what area to approach when I stepped back. Painting this required full absorption into the act. I would paint this for many hours at a time, all day many days, and every day for about 5 weeks.

–       All of Deep Sea and In Utero were painted with a single brush.

–       While painting this I couldn’t help but think of cycles of life, concepts like rebirth and reincarnation, cycles of the body, the seasons – the lasting effect of this engagement is probably yet to be realized. The color gradient within the circle I think becomes far-reaching, it is also composed of the primary colors, yellow, red, blue.