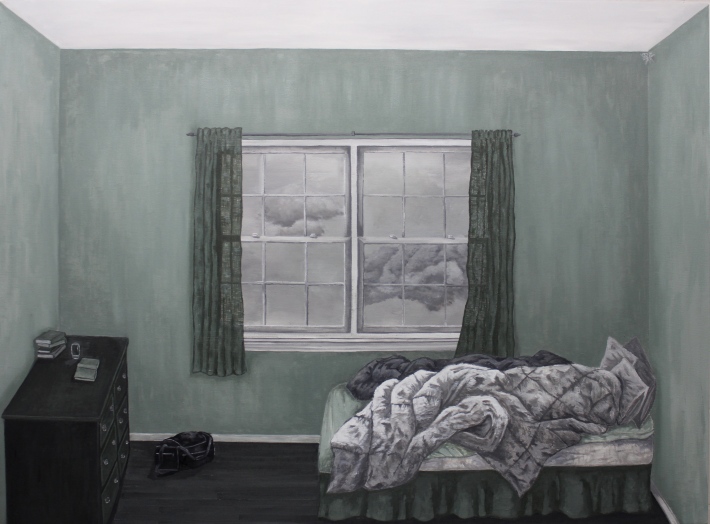 This is a painting I’ve recently finished as a submission to Gamblin’s Torrit Grey competition of 2013. Each year Gamblin takes all their leftover paint and pigment and mixes it together to come up with a Frankenstein color they release as “Torrit Grey”. They have an annual competition to paint a painting using only black, white and Torrit Grey. This year the Torrit came out a bit greeny, as you can see in the painting above.

The painting above is titled “Interval”. I did another version of this composition back in January of this year. This new one has some changes, adding the drapes is a major difference, along with the clouds out the window, the last one had trees. I wanted to create a painting that had narrative sort of qualities, as well as some multi-layering of idea and image. I also wanted to make a painting that was melancholy, and I think the uni-hue limitations of color serve this feeling well, especially since the Torrit this year turned out to be that greeny gray. The room feels a bit ghostly to me.

An Interval is a space between things, between two notes in music, or two points in time. This painting is intended to take place in a sort of emptiness, during a pause, or a break in normal cycles and repetitions –  maybe a point of transition, or a point of return. The room does not appear lived in for duration or made personal. The person has a black bag and a small stack of books as what she is traveling with or keeps with her. The bag appears to have not yet been opened or unpacked, whether this person has just arrived or is leaving soon is unknown. We find her in a point of stasis, wrapped up beyond identification.

One thing I tried to do here is to make the covers she is wrapped in resemble a hand, as though she is in the grip of the covers. I see this hand in two ways, the first is the hand extending from her body down, 4 fingers visible with the pointer being the end and corner of the cover. The second way I see this is a hand coming up from the bottom,with the curl in the covers becoming the thumb and the fingers coming up and over her, this version is a bit more nightmarish, as if something is coming up from under the bed.

Another thing I tried in this composition is to make the cloud out the window resemble the covers that she is wrapped in. Adding the drapes complicated this, but I think there is still enough to make the connection, I don’t know.

Theres a tiny spider web up in a high corner of the room, I added this just to maybe connect the way she is wrapped up with being caught in a web.

The other, darker cover that is next to her is a reference to something obscure and elusive, not made to represent a presence of a literal body, but suggestive of a sort of double or shadow. Also just literally another cover or blanket on the bed.

I enjoyed painting the drapes, it was a bit of an experiment for me to make the portions over the window appear somewhat transparent, with the stitch pattern exposed.

I also like the way the walls came out, I used 3 different tones to get the effect it has now, a bit less flat, greater dynamics and spatial perception, which I think also contributes to the ghostly quality.

Here is the earlier version of the painting I did in January, much different, but still one that I like, a bit more sad compared to the darker melancholy of the latest, the trees outside the window in silent sway, with the dimensions of the dresser in this one the perspective has a sort of hovering quality: